Jacques Hnizdovsky was born on January 27, 1915 in Ukraine in the Borshchivskyi Raion of Ternopil Oblast to a noble family bearing the Korab coat of arms. He was the youngest of seven children and the only member of his family that was able to emigrate to the west. He began his fine arts studies at the Academy of Fine Arts in Warsaw. Germany's invasion of Poland and bombardment of Warsaw forced Jacques to flee Warsaw and continue his studies at the Academy of Fine Arts in Zagreb. He was classically trained and had a great interest in portraiture, but Hnizdovsky was entirely self-taught in the art of printmaking. Hnizdovsky created hundreds of paintings, pen and ink drawings and watercolors, as well as over 377 woodcuts, etchings and linocuts after his move to the United States in 1949. He was greatly inspired by woodblock printing in Japan as well as the woodcuts of Albrecht Dürer. Influences on his early works can be seen on his website.[1] Hnizdovsky printed all his woodcuts and linocuts himself at his home studio. Woodcuts and linocuts were printed on washi, which is erroneously translated as "rice paper"[2] Hnizdovsky's prints frequently depict flora and fauna, and there are several reasons for him largely shifting his focus from the human form. His first few years in the United States were marred by financial difficulties, language difficultues and a creative crisis. But what at first were merely substitutes for the human form. later became his most cherished subjects. He was well known in all the botanical and zoological gardens in New York, where he would find subjects willing to pose at no cost. At the Bronx Zoo, he found many models that were willing to pose "for peanuts". Andy, the orangutan, who opened the Ape House of the Bronx Zoo when he was just a baby, was one of Hnizdovsky's favorite models.[3] When Andy died, the Bronx Zoo immediately purchased the Hnizdovsky woodcut in remembrance of Andy. Another favorite Bronx Zoo model was the sheep. Hnizdovsky's The Sheep would become his best known print, illustrating the poster for his very successful exhibition at the Lumley Cazalet Gallery in London. This poster, incidentally, can be seen in the kitchen scene of the film The Hours. Hnizdovsky has exhibited widely and his works are in the permanent collections of many museums worldwide. The Museum of Fine Arts in Boston has a large collection of his prints, as does the University of Mount Olive in North Carolina, which presumably has the largest collection of Hnizdovsky prints worldwide. Hnizdovsky designed numerous book covers and illustrated many books. He also designed several stamps and a souvenir sheet for the Ukrainian Plast postal service (issued in 1954 and 1961). 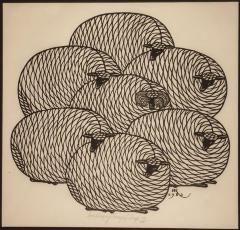