Best known for his marine paintings, watercolors, and etchings, Gordon Hope Grant was born in San Francisco and educated in Scotland. He then studied at the Heatherly and Lambeth Art School in London and returned to San Francisco where he worked as an illustrator for local newspapers until 1896, when he moved to New York as an illustrator for both the World and Journal. In 1899 Grant was sent as an artist-correspondent to South Africa by Harper's Weekly to cover the Boer War. From 1901 to 1909, he was an illustrator for Puck. In the years following service during World War I, Grant concentrated on marine subjects, producing paintings and etchings, and illustrating books with nautical themes. He also created a series of highly regarded views of Manhattan. A member of numerous professional societies, his work is held in important collections nationwide, including the Corcoran Gallery of Art, Washington, and the Metropolitan Museum of Art, New York. Gordon Hope Grant died in New York. 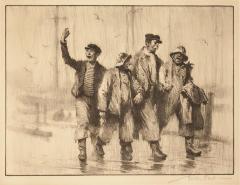 (Fisherman at) Work and Play