Adolph Gottlieb was born on March 14, 1903, in New York. From 1920 to 1921 he studied at the Art Students League of New York with Robert Henri and John Sloan. Afterward he traveled in France and Germany for a year and studied at Académie de la grande chaumière, Paris. In 1923 he returned to New York and studied at Parsons School of Design and at Cooper Union. After his first solo exhibition at Dudensing Galleries, New York, in 1930, he began to show regularly as a member of the emerging New York school with Willem de Kooning, Franz Kline, and Mark Rothko, among other artists. In 1935, together with William Baziotes, Rothko, and others, Gottlieb founded the Ten, a group of artists sympathetic to abstraction and expressionism that exhibited until 1940. He was also instrumental in forming the Federation of American Painters and Sculptors, a nonpolitical organization for emerging painters dedicated to new modes of expression. Gottlieb’s early works were paintings of American scenes, rendered in a style influenced by Milton Avery. After briefly working for the Works Progress Administration Federal Art Project’s easel-painting division, he spent two years in the California desert, where he created Surrealist-inspired images such as The Sea Chest (1942), which inserted incongruous elements into a desert landscape. His contact with European Surrealists exiled in New York during World War II led him to experiment with archetypal abstractions of animals, eyes, and spirals (as in the Pictograph series [1941–51], which included Voyager's Return [1946]) and bolstered his belief that evocative art has its roots in the artist’s subconscious. The Pictographs featured invented symbols reminiscent of African, Oceanic, and Native American art. If, however, Gottlieb discovered that a symbol had a recognizable meaning within either Western or tribal art, he immediately removed it from his painting vocabulary as part of his quest for a collective unconscious. During the 1940s and 1950s, Gottlieb joined his New York school contemporaries to protest the prejudices of curators and critics against avant-garde art (most notably in May 1950, with the abstract painters and sculptors dubbed the Irascibles, against the Metropolitan Museum of Art’s refusal to show abstraction in a juried show). His artistic project, however, remained highly individual. His next series, Imaginary Landscapes (1951–57), placed his symbols within a definitive foreground and background but without suggesting any regional landscape in particular. Burst (1956–74), the iconic series that followed, comprised paintings with a radically simplified image pattern: a red disc above a volatile black mass near the bottom of the canvas, as in Blast I (1957). The forms suggested both the spatial relationship of landscape and the elemental struggle of history painting. Gottlieb was the recipient of numerous honors, prizes, and awards, among which was the fact that he was the first American to win the Grand Prize at the São Paulo Biennial in 1963. He was the first of his contemporaries to be collected by a major institution when, in 1945, the Guggenheim Museum purchased 11 of his works, and, in 1946, the Museum of Modern Art (MoMA), New York, purchased a solitary work. He was the subject of 36 solo exhibitions in his lifetime, including a 1968 simultaneous retrospective held at both the Guggenheim Museum and the Whitney Museum of American Art, New York. Other sites for monographic exhibitions include the Jewish Museum, New York (1957, 2001); Institute of Contemporary Arts, London (1959); Walker Art Center, Minneapolis (1963); MoMA (1974); Corcoran Gallery of Art, Washington, D.C. (1981); Los Angeles County Museum of Art (1981); Tel Aviv Museum (1981); Phillips Collection, Washington, D.C. (1994); Brooklyn Museum of Art, New York (1994); and Peggy Guggenheim Collection, Venice (2010–11). Gottlieb died on March 4, 1974, in New York. 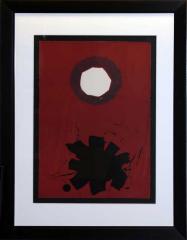