The only painter to exhibit in all eight Impressionist exhibitions organized between 1874 and 1886, Camille Pissarro became a pivotal artist and mentor within the movement. While the Impressionists are known for their depictions of city streets and country leisure, Pissarro covered his canvases with images of the day-to-day life of French peasants. His greatest work joins his fascination with rural subject matter with the empirical study of nature under different conditions of light and atmosphere, deriving from intense study of French Realism. Like those of his Impressionist cohorts, his paintings are delicate studies of the effect of light on color in nature. However, he continually sought out younger, progressive artists as colleagues, and his articulation of scientific color theory in his later work would prove indispensable for the following generation of avant-garde painters. In London, Pissarro was introduced to Claude Monet, and the two grew to favor J.M.W. Turner's work exhibited at the National Gallery. Daubigny introduced them to the art dealer Paul-Durand Ruel, who would later serve as Pissarro's agent in France. Having returned to Paris, Pissarro and Monet organized the first Impressionist exhibition in 1874 at the photographer Felix Nadar's gallery. Though the exhibition was met with harsh criticism and confusion from viewers, Pissarro's contributions received the more thoughtful commentary from writer and art critic Philippe Burty, who noticed the stylistic rapport between the work of Pissarro and Millet. The critic Theodore Duret would reiterate this in personal correspondence with Pissarro. Perhaps most importantly, Pissarro's professional and personal relationship with Cézanne reached its height in the mid-1870s when the two worked together, closely reexamining and reworking Pissarro's paintings from the 1860s. 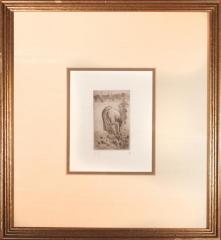