Rockwell Kent, though best known as an artist and illustrator, pursued many careers throughout his long life, including architect, carpenter, explorer, writer, dairy farmer, and political activist. Born in Tarrytown, New York, Kent was interested in art from a young age. These ambitions were encouraged by his aunt Jo Holgate, an accomplished ceramicist. Jo came to live with the family after Kent’s father passed away in 1887 and took him to Europe as a teenager. Kent attended the Horace Mann School in New York City, where he excelled at mechanical drawing. His family’s financial circumstances prevented him from pursuing career in the fine arts, however, and after graduating from Horace Mann in 1900, Kent decided to study architecture at Columbia University. Before matriculating at Columbia, Kent spent the first of three consecutive summers studying painting at William Merritt Chase’s art school in Shinnecock Hills, Long Island. There he found a community of mentors and fellow students who encouraged him to pursue his interest in art. At the end of Kent’s third summer at Shinnecock, Chase offered him a full scholarship to the New York School of Art, where he was a teacher. Kent began taking night classes at the art school in addition to his architecture studies, but soon left Columbia to study painting full time. In addition to Chase, Kent took classes with Robert Henri (American, 1865 - 1929) and Kenneth Hayes Miller (American, 1876 - 1952). His classmates included the artists George Bellows (American, 1882 - 1925) and Edward Hopper (American, 1882 - 1967). Kent spent the summer of 1903 assisting the painter Abbott Handerson Thayer (American, 1849 - 1921) at his studio in Dublin, New Hampshire—a position he secured through the recommendation of his Aunt Jo. Thayer gave the young artist time to pursue his own work, and that summer Kent painted several views of the New Hampshire landscape, including Mount Monadnock. In 1905 Kent moved from New York to Monhegan Island in Maine, home to a summer art colony, where he continued to find inspiration in the natural world. Kent soon found success exhibiting and selling his paintings in New York and in 1907 was given his first solo show at Claussen Galleries. The following year he married his first wife, Kathleen Whiting (Thayer’s niece), with whom he had five children. The couple divorced in 1924, and Kent married Frances Lee the following year. They in turn divorced after 15 years of marriage, and the artist then married Sally Johnstone. For the next several decades, Kent lived a peripatetic lifestyle, settling in several locations in Connecticut, Maine, and New York. During this time he took a number of extended voyages to remote, often ice-filled, corners of the globe, including Newfoundland, Alaska, Tierra del Fuego, and Greenland, to which he made three separate trips. For Kent, exploration and artistic production were twinned endeavors, and his travels to these rugged, rural locales provided inspiration for both his visual art and his writings. He developed a stark, realist landscape style in his paintings and drawings that revealed both nature’s harshness and its sublimity. Kent’s human figures, which appear sparingly in his work, often signify mythic themes, such as heroism, loneliness, and individualism. Important exhibitions of works from these travels include the Knoedler Gallery’s shows in 1919 and 1920, featuring Kent’s Alaska drawings and paintings, and the Art Institute of Chicago’s 1933 Paintings and Drawings of Greenland by Rockwell Kent. He wrote a number of illustrated memoirs about his adventures abroad, including Wilderness: A Journal of Quiet Adventure in Alaska (1920) and N by E (1930). His autobiography, It’s Me, O Lord, was published in 1955. Around 1920 Kent took up wood engraving and quickly established himself as one of the preeminent graphic artists of his time. His striking illustrations for two editions of Herman Melville’s Moby Dick—simultaneously precise and abstract images that drew on his architect’s eye for spatial relations and his years of maritime adventures—proved extremely popular and remain some of his best-known works. Throughout the 1920s and 1930s, Kent produced a range of print media, including advertisements, bookplates, and Christmas cards. Kent’s satirical drawings, created under the pseudonym “Hogarth Jr.,” were published in popular periodicals including Vanity Fair, Harper’s Weekly, and Life. In 1937 the artist was commissioned by the Federal Public Works Administration to paint two murals for the New Post Office in Washington, DC. By the onset of World War II, Kent had largely disengaged from the New York art world and instead focused his energies on a number of progressive political causes, including labor rights and preventing the spread of fascism in Europe. Though he never joined the communist party, his support of leftist causes made him a target of suspicion by the State Department, which revoked his passport after his first visit to Moscow in 1950 (though Kent successfully sued to have it reinstated). As his artistic reputation declined at home and his work fell out of favor, Kent found new popularity in the Soviet Union, where his works were exhibited frequently in the 1950s. In 1960 he donated 80 paintings and 800 prints and drawings to the people of the Soviet Union, and in 1967 he was awarded the Lenin Peace Prize. Kent died of a heart attack in 1971 and was buried on the grounds of Asgard, his farm in New York’s Adirondack Mountains. 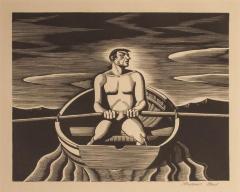