John de Martelly taught printmaking to the same students who studied painting from Thomas Hart Benton at the Kansas City Art Institute. He had also been a student of Benton’s, and had studied under Ross Braught prior to Benton’s arrival. When Benton was fired from the Art Institute, the Board of Governors offered de Martelly Benton’s job as head of the Painting Department. De Martelly was furious and quit. Eventually, he took a position teaching printmaking at Michigan State University. By the late 1940s, de Martelly had abandoned his regionalistic subject matter that he learned from Benton and spent the remainder of his life as an abstractionist. He also closely studied Daumier. De Martelly produced numerous lithographs that were sold through the Associated American Artists Galleries in New York. 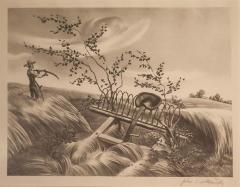