Thomas Hart Benton was a major American artist from Missouri. His paintings are famous for showing ordinary people doing common things. He drew and painted portraits, landscapes, and scenes of people at work in farms, factories, and busy cities. His best-known works are public murals, or scenes on the inside walls of buildings. Benton’s murals are lively records of life in America from pioneer times onward. From about 1912 to 1935, Thomas Hart Benton lived and worked in New York City. He painted during the summer months on Martha’s Vineyard, Massachusetts. He married Rita Piacenza in 1922. Together, they had two children, Thomas Piacenza (T. P.) and Jessie.In 1924, Benton came back to Missouri to visit his father who was very sick. This visit changed Benton’s life. His interests became clearer. He took pride in his Midwestern roots and began painting ordinary Americans not often shown in art. He started making drawing trips that took him across America. He visited steel mills, coal mines, and logging camps. He floated down rivers in canoes. He watched workers picking cotton in the South. He observed everything he could about ordinary American life during the 1920s and 1930s and recorded what he saw in his sketches. He then used his sketches as the basis for his paintings and murals. Benton built small clay models, or maquettes, for each painting. Then he painted his scenes while looking at his clay models. Thomas Hart Benton became the leader of a movement in American art called regionalism. He based his art on personal observation. He showed working people in all regions of America, including poor, rural areas. Benton called attention to problems that he thought all Americans should know about. Benton’s style of painting made common people into heroes. He gave them big bodies with lots of muscles and painted them using deep, rich colors. Benton also painted villains into his pictures. The villains were usually rich and powerful people Benton did not respect because they got ahead by taking advantage of others. Not everyone liked Benton's work. Some people thought he was too outspoken about politics and art. Many Americans, however, truly admired Benton’s work and ideas. Various organizations hired him to create public art. One of his most famous murals is A Social History of Missouri. It is in the state capitol in Jefferson City, Missouri. In September of 1935, Benton moved to Kansas City, Missouri. He lived there and worked in his studio until his death on January 19, 1975. He kept painting to the end of his life. His paintings and murals can be seen in books as well as museums and public buildings across America. 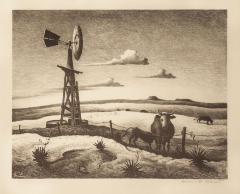