Haden was a surgeon, etcher and collector. He was educated at Derby School, Christ's Hospital, and University College, London. He continued his studies in the medical schools of the Sorbonne, Paris, and at Grenoble. In 1842 he became a member, and in 1857 a fellow, of the Royal College of Surgeons. From 1851 to 1867 he was honorary surgeon to the Department of Science and Art. He had settled in private practice at 62 Sloane Street in 1847, moving in 1878 to 38 Hertford Street, Mayfair. He was consulting surgeon to the Chapel Royal, a vice-president of the obstetrical society of London, and one of the principal movers in the foundation of the Royal Hospital for Incurables in 1850. It was Haden who in 1858 encouraged JW to work from nature, so that JW dedicated to Haden his first set of etchings 'French Set', which was printed by Auguste Delâtre in Paris and marketed with Haden's help in London. Whistler settled in London in 1859 and often visited Haden's household at 62 Sloane Street. He painted and etched a number of domestic scenes set within Haden's home, including Harmony in Green and Rose: The Music Room y034 and Reading by Lamplight 037. Haden's old master prints and his knowledge of photography and optics were of great importance for the development of Whistler's career. However, Whistler and Haden's relationship was not trouble free. Haden objected to Whistler's relationship with Joanna Hiffernan in the early 1860s. On 23 April 1867 Whistler accused Haden of disrespect towards his late medical partner Dr Traer and knocked Haden through a plate-glass window in Paris. Haden and Whistler never spoke to each other again. On 18 December 1867 Whistler was expelled from the Burlington Club as a result of a complaint made by Haden concerning his behaviour in Paris. Haden became the president of the Society of Painter-Etchers. He was largely responsible for the Rembrandt exhibition at the Burlington Fine Arts Club in 1879, and he published The Etched Work of Rembrandt (1879). Other publications included The Art of the Painter-Etchers (1890); The Royal Society of Painter-Etchers (1891). He was elected a member of the Athenæum in 1891. His public service was rewarded in 1894 by a knighthood, and his distinction recognized abroad by honorary membership of the Institut de France in 1905, the Académie des Beaux Arts, and the Société des Artistes Français. Among the medals awarded him at various times for etching were Grands Prix at the Expositions Universelles at Paris in 1889 and 1900. 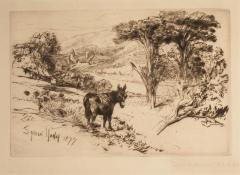