"Even the subtlest influences from outside any given culture will affect the manner in which that culture is directed; a point that is exemplified by the history of Middle Eastern art and craft. I explore this through making work that questions the effect of today’s global influences on the direction of tomorrow’s expression in Middle Eastern culture. I employ silkscreen and embossment transfer techniques to slightly skew complex historical patterns, and emphasize volume on traditional utilitarian wares. Bridging technology and form is an essential element in my work; however, it is important that neither overwhelm the final aesthetic. Though I make pots that are complex in their creation, I hope to illustrate the intrinsic beauty found in the everyday ceramic object while using the familiarity and complexity of historic patterns to go beyond the role of utility. In an attempt to blend pattern, surface and form, my goal is to create work that simultaneously elicits a visceral and intellectual response, followed by a contemplation of the work as a whole. If one holds a piece that I have made, my work is complete; if one’s attention is held by that piece, the work is understood." Originally from Vermont and raised in Seattle, Forrest Lesch-Middelton lives and works as a potter and tile artist in Petaluma, CA. He received a BFA from Alfred University in New York in 1998, and in 2006 he received his MFA from Utah State University. He is known for his innovative practice of combining image transfer techniques with wheel thrown forms, a process he calls "Volumetric Image Transfer." His work has been featured in Ceramics Monthly Magazine, The New York Times, Architectural Digest, and Sunset Magazine. In 2014 he was named "Ceramic Artist of the year" by Ceramics Monthly Magazine and Ceramic Arts Daily. 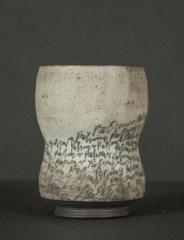