William Fuhri was born in Dallas, Texas, in 1933. He lived in Fort Worth, Texas, from 1933-1949. From 1949-1952, he lived in Kansas City. He received his BA degree from Grinnell College in Arts in 1958 after attending Grinnell earlier for a short period (playing football and track) and also attended the University of Iowa for one year. While at Iowa, he studied under the printmaker, Mauricio Lasansky. He was a member of the US Marines from 1954-1956. He began to study art in Florence, Italy, in 1960. He had a one-man exhibit of his paintings while there in the Numero Gallery and the Goldoni Gallery. He also exhibited with the Aquilone Gallery in Spoleto and the Appunto Gallery in Rome. Fuhri’s paintings were displayed at the World House Galleries in New York City in 1962. He served on the faculty of the Kansas City Art Institute for a summer session in 1969. He was very active in the Kansas City art community. Fuhri died in 1983 in a motorcycle accident. His art works are in the Print and Drawing Collection of the Uffizi Gallery in Florence as well as in private collections in the US, Italy and Great Britain. Fuhri submitted two oil paintings for the exhibit accompanying the Fine Arts Festival held April 13-April 20, 1958. “A Study in Oil” was given a purchase award and acquired for the Fine Arts Collection. 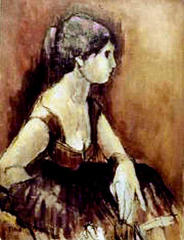