Lucien Dautrey was born May 6, 1857, at Anoxonne, Department de Cote d'Or, France. He originally studied with a view of entering a commercial life, but subsequently turned his attention to art-metal work, at which he continued until 1883. Visiting the Universal Exposition of 1878, he was greatly impressed with the display of art, and from that time he commenced the study of drawing, adding shortly afterwards that of painting and etching. At the Salons of 1880, 1882, and 1883, he exhibited several paintings and studies of an unimportant nature. In 1884, realizing that it was almost impossible to study etching without the directions of a teacher, he entered the studio of Charles Courtry, where he remained some seven or eight months. It was this year that he made his first important plate. At the Salon of 1885 he exhibited "The Gleaner" after the painting of Jules Breton, for which he received and Honorable Mention, and he has been represented in every Salon since as well as in the Universal Exposition of 1889. In 1889, Dautrey met for the first time the great etcher, Felix Bracquemond, and conceived a firm friendship for him. It was under his advice and supervision that he produced his best work, "The End of Work" after Millet, which was exhibited in 1890. It represents a laborer putting on his coat at the close of day. The picture, although not so artistic, possesses many of the characteristics of the "Augelus." This year he exhibits a plate of "Spring," a shepherdess and sheep after Vayson, which is, in his own opinion, immeasurably superior to anything he has yet produced. 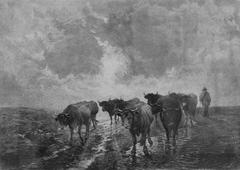