A painter of portraits, genre scenes and landscapes and a lithographer, Robert Koehler was born in Hamburg, Germany and emigrated to America with his parents in 1854 when Robert was four years old. The family lived in Milwaukee where Robert Koehler attended the German-English Academy and studied with the drawing instructor, Henry Vianden. At age fifteen Koehler apprenticed to a lithography firm, Seifert and Lawton, but continued his studies with Vianden, who encouraged the young man to study in Munich. In the early 1870s, Koehler took a job as a lithographer in Pittsburgh and shortly after in New York where he took night classes at the National Academy of Design with genre painter Lemuel Wilmarth. In the fall of 1873, Koehler left for Munich, a destination also encouraged by Wilmarth who had studied there. By October, Koehler was enrolled in the Royal Academy but could only stay two years because he ran out of money. Although, his exposure to genre painting turned his attention away from lithography , he returned to Milwaukee briefly and earned money as a lithographer and then went back to New York City where he became one of the founding members of the Art Students League. In New York, Robert Koehler became a good friend of George Ehret, a wealthy brewer much impressed by Koehler, and Ehret financed Koehler's return to Germany in 1879. He studied with Ludwig von Looftz, a painter of genre and landscapes and won bronze and silver medals from the Academy. He was elected President of the American Artists' Association in Munich and belonged to the Society of Etchers. He chaired the American Division of the Munich International Art Exhibitions and for the excellence of his work, received the Cross of the Order of St. Michael from the Prince Regent of Bavaria. Arranging for works to be exhibited, Koehler made several trips back to the United States in the 1880s. From 1887 for the next five years, he oversaw a private Munich art school where the majority of the students were American. During this period, his own style matured with his paintings of peasant genre and portraits and with special emphasis on working-class figures. In 1886, he finished The Strike, his most famous painting and one that depicts laborers confronting capitalist bosses. Robert Koehler returned to New York City in 1892, and set up his studio where he did primarily portraits. Tthe next year, he went to Minneapolis and spent the remainder of his career there. He served as Director of the Minneapolis School of Fine Arts until 1914, a job that diverted him from painting although he did city scenes that were well received. However, his painting, Rainy Evening on Hennepin Avenue (ca.1910) is done in Tonalist style, rare for this artist, but shows his admiration of James McNeill Whister, whom he had met earlier in his career. In 1895, he had married Maria Fischer from Rochester, New York, and Rainy Evening features his wife and son walking on the street.. Robert Koehler died in 1917 from a heart attack while riding a street car in Minneapolis. 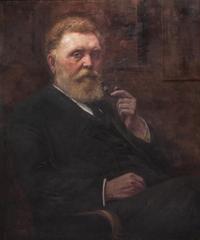