"Born in De Witt, Iowa, John Bloom would become a prominent figure among the Eastern Iowa Art community. Bloom moved to Davenport where he attended St. Ambrose University for two years and studied at the Tri-City Art League School. After two years he enrolled at the Art Institute of Chicago in 1926. During his third year at the Art Institute, Bloom taught first-year drawing and composition classes. Bloom finished his studies at the Art Institute School in 1930, the same year Grant Woods American Gothic became a world sensation. For him, the ‘30s would be a decade of intense artistic creation. In the summer of 1932, Bloom joined the Stone City Art Colony upon a special invitation from Grant Wood. As a student of Wood at the Stone City Art Colony and later his colleague in mural painting, Bloom felt Wood’s influence in his palette and style. For the library murals at what is now Iowa State University, Wood and his assistants used the palette of Antlers Zorn, the Swedish artist: cadmium red light, yellow ochre, black and white. Bloom still favors those colors with a few additions. Grant Wood made us see Iowa on his terms. John Bloom gives us an even closer sense of place in his scenes at Fejervary Park, the Davenport levee and Crystal Lake. He shows us the way we were in the years of the Great Depression. Three sons, Jerry, Tom, and Charley, were born to the Blooms, occasioning several moves to larger quarters. Needing reliable support for his young family, John Bloom entered the hidden years of his artistic development. He worked four days a week as an industrial designer, devoting the weekends to lithography. He bought a press for S25 from a printing company that went out of business and found some lithograph stones for S5, however the enterprise was not profitable. Bloom picked up some illustrating work at the Rock Island Arsenal and served as the cheering section for Isabel’s rising fortunes as a Sculptor. After David Losasso opened his Mississippi Fine Art Ltd. in the Village of East Davenport in1981, Bloom formed the pleasant habit of dropping in to see the art. When Losasso asked to see his own work, he brought in some lithographic prints he had done in the 1940s. Losasso encouraged him to create more and put him in touch with Leslie Bell of the St. Ambrose University art faculty for help with the printing." 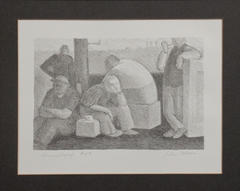