Léon Augustin Lhermitte (1844 – 1925) was a French realist painter and etcher whose primary subject matter was of rural scenes depicting the peasant worker. He was born in Mont-Saint-Père. A student of Lecoq de Boisbaudran, he gained recognition after his show in the Paris Salon in 1864. His many awards include the French Legion of Honour (1884) and the Grand Prize at the Exposition Universelle in 1889. Lhermitte died in Paris in 1925. Lhermitte’s innovative use of pastels won him the admiration of his contemporaries. Vincent van Gogh wrote that "If every month Le Monde Illustré published one of his compositions ... it would be a great pleasure for me to be able to follow it. It is certain that for years I have not seen anything as beautiful as this scene by Lhermitte ... I am too preoccupied by Lhermitte this evening to be able to talk of other things."[1][2] Lhermitte is represented in the collections of museums around the world, including Amsterdam, Boston, Brussels, Chicago, Florence, Montreal, Moscow, Paris, Rheims, and Washington. 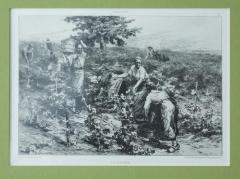