Blue Corn (Crucita Gonzales Calabaza) was born on December 7, 1921 in San Ildefonso, a Tewa Indian village located along the Rio Grande River, northwest of Santa Fe, NM. After leaving the Santa Fe Indian School at the age of 12, Blue Corn became interested in making pottery and learned the craft from her grandmother. During World War II, she worked as a housekeeper for two years for J. Robert Oppenheimer, the overseer of the Manhattan Project at Los Alamos. Later, Blue Corn commented, “They used to take us up [to Los Alamos] in an Army truck. We didn’t ask questions up there. We weren’t the type to ask questions anyway.” At age 20, Blue Corn married Santiago, a silversmith and bead-maker from the Santo Domingo pueblo. The couple moved to San Ildefonso where Blue Corn resumed making pottery. She used materials found in the area, although she purchased volcanic ash to help harden the clay. She modeled her pottery using the coil or ring technique, remaining true to native traditions. Blue Corn utilized the Rocky Mountain bee plant (guaco) to produce the black pigment on her black-on-black pieces. Other materials used were found along the Rio Grande including red, green and yellow clay, mica and polishing stones. Blue Corn fired her pots over an open fire made of cedar wood and manure. Blue Corn died May 3, 1999, but several of her children carry on the traditional way of making pottery. Designs for Blue Corn’s pottery are traditional forms handed down by her people and created, as she says, “from my head.” She is credited with reintroducing the polychrome technique, a style that combines more than one color on a vessel. Such vessels are made from fine white clay. She produced black-on-black, black-on-red, black on white, and red-on-white designs on pots. Originally, Blue Corn’s husband decorated her pots, but after his death in 1972, either she or her children assumed the task. Blue Corn’s reputation is strong among southwest Indian potters. She won more than sixty national and international awards for her pottery and sold her pots for top market prices. In 1981, she was given the 8th Annual Governor’s Award, New Mexico’s highest artistic honor. Her pots are in leading museums and at the White House, the Smithsonian Institution, and in many private collections. 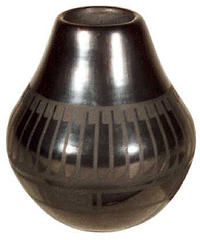