Painter and printmaker French. He is the older brother of the painter Armand Leleux . Self-taught painter Adolphe Leleux exhibited at the Paris Salon from 1835. That first year, there has scenes of the Picardy countryside. Formed in the engraving workshop Sixdeniers Alexandre Vincent , 25 years old when he decided to devote himself primarily to painting. In 1838, he discovered Britain and multiplies the genre inspired by the Breton countryside, which earned him the nickname of Leleux le Breton. In 1847, he made ​​a trip to Constantine with Edmond Hédouin . Inspiration widens to Algeria, Spain, the Pyrenees or the Morvan. In 1848 he met the painter Charles Chaplin that initiates in the French countryside. Post-romantic realist painter, Adolphe Leleux was notably friend Théophile Gautier and Gérard de Nerval. 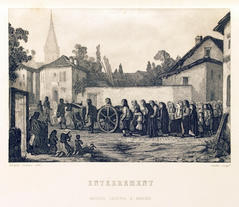