Félix Edouard Vallotton (December 28, 1865 – December 29, 1925) was a Swiss painter and printmaker associated with Les Nabis. He was an important figure in the development of the modern woodcut. He was born into a conservative middle class family in Lausanne, and there he attended Collège Cantonal, graduating with a degree in classical studies in 1882. In that year he moved to Paris to study art under Jules Joseph Lefebvre and Gustave Boulanger at the Académie Julian. He spent many hours in the Louvre, where he greatly admired the works of Holbein, Dürer and Ingres; these artists would remain exemplars for Vallotton throughout his life.[1] Vallotton's earliest paintings, chiefly portraits, are firmly rooted in the academic tradition. In 1885 he painted the Ingresque Portrait of Monsieur Ursenbach as well as his first painted self portrait (seen at left), which received an honorable mention at the Salon des artistes français in 1886. 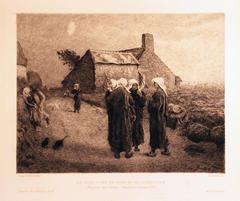