William Unger began his formal art studies in 1854 as a student of Joseph Keller, in Dusseldorf. He then finished his studies at the Academy in Leipzig. During his successful career as an etcher Unger received numerous awards including medals from expositions in Paris (1878), Vienna (1888) and Berlin (1891). Unger became most famous for his etchings after the paintings of both old masters and contemporary artists, and these reproductive works occupied most of his career. Original etchings -- that is, those both designed and etched by him -- were limited to only a small number. Self-Portrait is obviously a fine example of his talents as an original etcher. 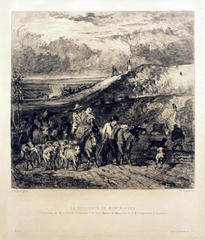