Louis Eugène, or Eugène Louis, Pirodon was a French artist born in Grenoble. He was a painter of genre scenes, portraits, still lifes, and animals. He was also a lithographer. Pirodon studied with Louis-Godefroy Jadin (1805-1882), a friend of Alexander Dumas, who was a painter of animals and hunt scenes. Pirodon also studied with an artist named Hébert. Possibly this was Antoine-Auguste-Ernest Hébert (1817-1908), a history painter who also painted portraits and genre scenes. Hébert, too, was from Grenoble but he went to Paris to study law. He did indeed become a lawyer, but he also studied at the Ecole des Beaux-Arts in Paris and won the Prix de Rome for a painting he had submitted to the Salon of 1839. Pirodon exhibited his work in the annual Salons from 1852 to 1908. He won honorable mention for his work in 1853, 1861, and 1863, a third class medal in 1855, a second class medal in 1894, and a silver medal in 1900 at the Exposition Universelle in Paris. 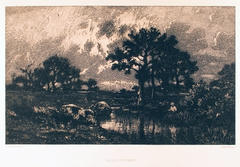