He began as a painter on the textiles Manufacture of fabrics of Jouy-en-Josas , then worked as a draftsman in a trading house in Paris. He devoted himself entirely to art from 1838 , and learned from burning of Eugene Nyon . Practicing the techniques of etching and that, fallen into disuse, the soft ground (that rehabilitation), he became an etcher renowned, reputed to be a fine writer and a fine colorist . Content production demonstrates its clear preference for landscape subjects. He regularly exhibited his etchings at Salon painting in Paris in 1842 to 1848 . He published albums designed landscapes during his travels. He was the illustrator of many books (including Contes de Perrault ) and also designed for newspapers, mainly The Artist and The picturesque Store . In addition to its own production, Marvy engraved the works of many other artists. Does not taking the directory of his contemporaries (including landscape Jules Dupré , Théodore Rousseau , Charles Le Roux , Diaz , Louis-Nicolas Cabat and Alexandre-Gabriel Decamps ), he was also one of the first writers to reproduce the boards pictures of the great old masters (especially the complete works of Rembrandt ) for dissemination to the public. Forced to flee to London during the unrest of 1848 , Marvy was welcomed and supported by the British novelist Thackeray , he was the fellow workshop when he had begun studying art in Paris in 1832 . Thackeray found him the book of the famous satirical magazine Vanity Fair and introduced to Sir Thomas Baring , including Marvy and could burn the prestigious collection of works of the great masters English landscape. Thackeray also wrote explanatory notes of the collection bringing these reproductions, published under the title of English Landscape Painters Effective Sketches (London, 1850 ). Louis Marvy was a personal friend of Eugene Delacroix and Paul Gavarni . He was the master of Leo Drouyn and writer Adolphe Riffault . Died prematurely, he was buried in Montmartre cemetery . 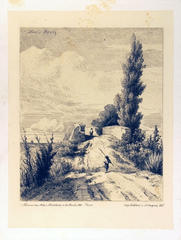