Andre Lancon studied at the Ecole des Beaux Arts Lyon and finished his studies in Paris. It becomes animal sculptor admiration for the works of Antoine-Louis Barye . Lançon exhibited his works for the first time at the Paris Salon in 1861 and until 1870. During the Franco-Prussian War he was a sergeant of a battalion. Related to the Paris Commune , he was imprisoned for six months. Upon his release, he changed his name and is now called Auguste Lancon. He became military painter and participates in the Balkan War in 1877 . He made several etchings showing scenes of war he had witnessed. In 1893, rue Auguste Lancon in Paris takes its name in honor. His artist's studio , perfectly preserved, still exists in his birthplace, Saint-Claude, 3 College Street. 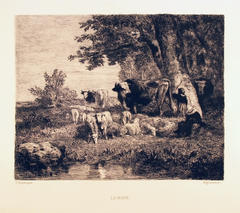