Alfred Alexandre Delauney was born in Normandy, France. In 1842 he went to Paris to work as an assistant for his uncle (mother's brother) named Salmon. Salmon was a print seller who had a shop which he transferred to his nephew in 1850. Delauney is considered an etcher and a painter. He married a daughter of Pierre-Amédée Varin (1818–1883), who was a notable engraver as well. 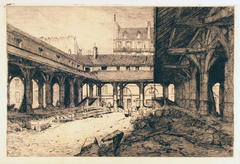