Auguste Brouet (1872-1941) printmaker and illustrator, was born to indigent parents living in Montmartre, the artistic quarter of Paris, and he remained in Paris his entire life. He was apprenticed first to a lithographic printer and then to a lute maker but between the ages of thirteen and fifteen he attended evening classes in drawing. Brouet entered the École des Beaux-Arts at the age of sixteen years old studying first at atelier Élie Delaunay and then with Auguste Delâtre, the master printer who introduced him to printmaking. His first etchings were copies of works by Turner, Corot, Chardin and Whistler. Brouet produced over 300 etchings and drypoints recording the people and places of Montmartre, the circus, and the soldiers of World War I. He is considered to be one of the finest original etchers of early twentieth century French Art. 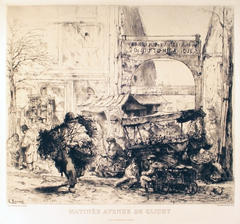