Camille Bernier was a French painter born May 3, 1823 in Colmar. His father, Antoine Pascal Bernier, was Receiver General of the Department of Finance and his mother, Marie Nanine, was the daughter of Denis Lefevre, General Secretary of Finance during the Revolution. After studying in Switzerland, he turned to painting under the instruction of Leon Fleury and took the traditional trip to Italy. His painting of Village Arberg accepted at the Universal Exhibition of 1855, marks the official beginning of his career. He then had one or more of his paintings in the Salon every year up until 1892. As a landscape painter, he had an extreme sense of "sincerity" in the approach to nature and attention to detail. He and his wife, Camille Bernier (married in 1856), settled in the region and in 1859, they moved to the Riviera for their newborn, who later passed away. Bernier's interest focuses on scenes that were most often within walking distance of his house: the edges of the Isole, woods and ponds Castle Quimerc'h, farms, moorland, roads and the surrounding pastures. Camille Bernier remarried in 1895 to Barbara Hoechle Oliva, a former Swiss governess to his niece Edith. In 1880 he founded a girls' school in St. Meen led by the Congregation of the Daughters of the Holy Spirit. 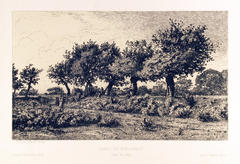