Lena Qualley was born in Ridgeway, Iowa, on October 5, 1871. Qualley’s parents were Ole and Eli Qualley. Her nephew, Orlando (Pip) Qualley, was an eminent classics scholar and administrator at Luther College who donated a number of objects which comprise the Qualley Collection. The family originated from Vestre Slidre, Oppland, Norway. Lena Qualley was baptized and confirmed at Lincoln Luther Church and attended the Ridgeway public schools. She taught in a rural school near her home after graduation. Qualley completed the art course at the Art Institute of Chicago around 1900. After that time, she studied in Paris for three years working with MacMonnies, de la Gandara, Simon and Cottet. She moved to Hillsdale, MI, from 1905-1910 where she taught art at Hillsdale College. She then moved to Ohio where she organized the Toledo School of Art in Toledo, OH. Form there she moved to New York City where she became an art advisor to the New York public schools. At the time of her death on December 22, 1952, she had retired and was living in New York City. Qualley exhibited her paintings at the Art Institute of Chicago from 1902-1905. She also exhibited in St. Louis and at the Paris Salon of Art. Qualley moved from “creative work to education” as indicated by her career choices listed in the paragraph above. The known paintings by Qualley are from the early part of her career. According to her obituary, Qualley was deeply interested in the church and foreign missions and made this a central part of her life. She endowed the Lena Qualley Missionary Fund at Wheaton College in Wheaton, Illinois. The bust by Qualley in the Fine Arts Collection was donated to Luther College by Duaine Olson, husband of Eileen Qualley Olson, in 2003. Eileen Qualley Olson was the daughter of Orlando “Pip” Qualley. How the family acquired the bust is unknown. Qualley is included as an artist in the Norwegian-American Collection concentration.

Dundas, Verde. “The Modeling Class at the Art Institute.” Brush and Pencil 2:4 (July 1898), 167-176; Obituary, Decorah Journal, December 25, 1952; Dictionary of Women Artists. Boston: G.K. Hall, 1985; The Annual Exhibition Record of the Art Institute of Chicago, 1888-1950. Madison, CT: Sound View Press, 1990; Nordics in America: The Future of Their Past. Nelson, Marion. ”Norwegian-American Painting in the Context of the Immigrant Community and American Art.” Northfield, MN: The Norwegian-American Historical Association, 1993; Who Was Who in American Art. Madison, CT: Sound View Press, 1999 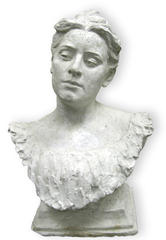 Bust of a Woman