Ida Hopkins Kadashan was born May 22,1906, in Hoonah, Alaska, the eldest Eagle-Thunderbird of a five-generation family. Her Tlingit name was Kaashtinaa and her nickname was Soonjeekoosa. She worked in various fish canneries in southeast Alaska, primarily in Hoonah. She also ran the movie theater in Hoonah for several years. Kadashan was considered a master spruce root basket weaver. She won awards for her basket weaving from the state fair at Haines and was recognized for her work by basket weaving experts. During her life she was deeply interested in Alaska Native cultural activities. She taught Native culture at the Hoonah school and volunteered at the Alaska State Museum in Juneau. She belonged to the Alaska Native Sisterhood, serving as secretary, treasurer, and grand emeritus. Kadashan was a Huna Totem and Sealaska shareholder. Later in life she did weaving at the Mount Roberts Tram and the Nakahidi Theater in Juneau. Kadashan died March 3, 2002, in Juneau. The spruce root basket in the Kemp Collection was acquired in Hoonah, Alaska, ca. 1976. Since the basket is small, and the resulting design is comparatively simple, it is difficult to definitively attribute it to one maker. Speculation is that it may have been created by Kadashan since she was an active basket-maker in Hoonah at the time it was acquired. The design is the traditional Fireweed design which ornaments the basket with black and orange dyed grass. It was decorated with “false embroidery” so that the pattern shows only on the outside of the basket. Twining (a type of weaving) was reserved for spruce root baskets woven by the Tlingit. Women were the sole makers of spruce root baskets. The rim is finished in a braided pattern. 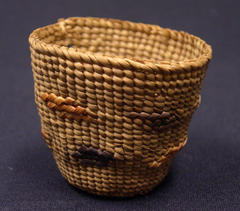