Inuit sculptor Peter Mayac was born in 1913. The family originated on King Island, an island in the Bering Sea near the western coast of Alaska. During summers, the residents would move to Nome, Alaska, where they would sell their goods. Peter Mayac, who learned to carve as a young man, became especially well-known for his walrus ivory carvings of Alaska wildlife. These carvings became especially collectible. Mayac died in 1976. 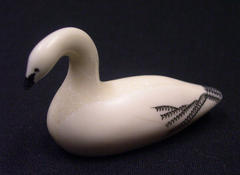