Paul Theodore Granlund was born on October 6, 1925, in Minneapolis, Minnesota. Granlund was the son of Rev. Clarence and Naomi Granlund. After graduation from Central High School in Minneapolis, he served in World War II in the Army Air Corps. He graduated from Gustavus Adolphus College in 1952 and received an MFA degree from the Cranbrook Academy of Art in 1954. Also in 1954, he received a Fulbright grant to study sculpture in Italy. He studied in Italy for a second time from 1957-1959 at the American Academy in Rome with funding from the Guggenheim Foundation. During the 1960’s, Granlund was head of the sculpture department at the Minneapolis College of Art and Design. He joined the faculty of Gustavus Adolphus College in 1971, becoming their sculptor-in-residence until his retirement in 1996. Granlund died in Mankato, MN, September 15, 2003. He was married to Edna (Spaeth) Granlund with whom he had four children. Granlund won numerous competitions with his sculptural works including the Minnesota Governor’s competition for a Vietnam War Memorial. His work has been exhibited in more than 70 one-man shows throughout the United States. One of his most well-known sculptures is of Charles Lindbergh which is located at Le Bourget Field in Paris. Sculptures have also been placed on the campuses of many colleges, at the Mayo Clinic in Rochester, Minnesota, and at the State Capitol in St. Paul. Catalogs of his work indicate he created over 600 sculptures during his lifetime. The bronze sculpture at Luther College by Granlund was donated by Ruth and Wilfred Bunge in 2007 in honor of their parents. The sculpture was created in 1998 and was produced in an edition of 5 works. During a chapel service on October 5, 2007, the sculpture was dedicated with remarks by Will Bunge. Bunge noted that the sculpture represented a central, clothed figure of Jesus, around whom other figures of all ages from the “tree of life” were orbiting. The sculpture is located in front of the Dahl Centennial Union and rests on a bronze base which, in turn, is placed on a cement plinth. 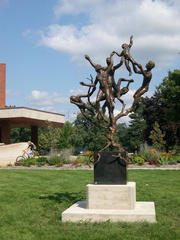