Halvor Landsverk, the youngest son of Tarkjel Landsverk, was born in southeast Minnesota on January 20, 1909. His father had emigrated to America from Seljord, Telemark in 1884 while his mother, Helga Oian, had come with her family from Hjartdal (Sauland), Telemark about 1857. Halvor’s formal art training consisted of a three-year correspondence course in art provided by a school in St. Paul, MN. According to art historian Marion Nelson, Halvor devoted his time to wood carving and created sculptures in white and colored cement during the 1930s. During this time he also joined his father in operating a family museum on the home farm near Highland Prairie, MN. This museum was open for eighteen years and displayed items which Tarkjel and Halvor had created. From the 1940s until the early 1960s, Halvor engaged in farming and factory work. He also carved several significant relief plaques, one of which was a “Last Supper” made for the Highland Prairie Lutheran Church. Encouraged by Dr. Alf Gundersen of LaCrosse, WI, he began to produce art full-time, concentrating on creating kubbestoler, chairs carved from the trunks of basswood trees. During his lifetime, he was known to have carved over 300 kubbestoler. Halvor Landsverk and his wife, Pernella Johnson, were the parents of two daughters, Karen and Arlene. He died in Rushford, MN, on July 19, 1998. Halvor Landsverk’s carving was heavily influenced by watching his father, Tarkjel, also carve objects such as boxes and kubbestoler and decorate utilitarian furniture. He learned early that basswood was an ideal carving wood since it was classified as a hardwood with a dense cell structure. It also was readily available in the woods of southeast Minnesota and easy to carve, less likely to split than other local woods. Once the tree was cut down, the trunk was cut into chunks about 38 inches long. The bark was removed and the section smoothed. Each section was then hollowed out and allowed to dry slowly. The sections were sanded to prepare a blank or kubbestol form which was then ready for carving. According to Nelson, the kubbestol shape is a national symbol, with roots going back to the Middle Ages in Telemark. Although chairs were not common in early Norwegian homes, since most people sat on benches, some were made and reserved for the master of the house or special guests. Typically kubbestoler are decorated with objects associated with the Norwegian landscape such as houses and stave churches as well as historical items such as Viking ships. Halvor decorated his chairs with such scenes, separated by a horizontal band carved around the middle of the chair. While he did most of the detail carving by hand, he also used a router for a chisel. The small indentations in the background of the scenes were done using 8 penny nails and a mallet. The scenes are surrounded by vines. After the carving had been completed, the chairs were stained with an oil stain and varnished with polyurethane. An average of 300 hours was used to create each kubbestol. Phillip Odden explained that prospective buyers could “choose from a limited number of scenes that included a traditional stabbur, a stave church, a pair of dancers in traditional Norwegian costume, a nisse, a Viking ship, and a Viking chief, in any combination.” He also noted that Halvor sometimes textured the background to accentuate the scenes. Halvor was invited to participate in a crafters’ display during the Bicentennial sponsored by the Smithsonian Institution and the National Park Service. He demonstrated his carving techniques for King Olav V of Norway when the King visited the Norwegian American Museum in Decorah in 1968 and has had a number of his art works added to the Museum’s collection. A film of focusing on his work was produced by the University of Minnesota in 1973. 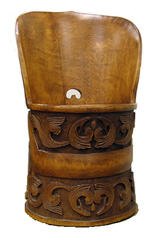