Carolina Helena (Wilkinson) Armington was born September 11, 1875, in Ontario, Canada. She studied art in 1890 under J.W.L. Forster in Toronto. After 1892, she taught in Halifax and became a nursing student in Guelph, Ontario. In 1899, Armington worked as a nurse in New York at Miss Alston’s Hospital. She served as a private nurse in Toronto from 1899-1900. Then, she traveled to England and France, arriving finally in Paris where she married Frank Armington. In 1901, Armington relocated to Winnipeg where she began giving painting lessons. She moved to Paris in 1905, where she attended the Academie de la Grande Chaumiere. She also studied at Academie Julian, occasionally working as a private nurse to supplement their income. Armington began etching scenes in Paris and continued in England, Germany, Italy, and Algeria, specializing in architectural and landscape etchings. In 1918, she was commissioned to execute etchings for the Canadian War Memorials portfolio. Additionally, Armington made etchings of famous cathedrals in Chartres, Rheims, Amiens, Rouen, and Tours. Her first solo exhibition of paintings, entitled “Tableaux par Caroline Armington,” was held in Paris in 1923. In 1924, she had an exhibition at the Ralston Gallery in New York, followed by exhibitions in several other venues including the Corcoran Gallery of Art in Washington, D.C. Armington donated numerous etchings to institutions such as the Des Moines Association of Fine Arts (now the Des Moines Art Center), the Cleveland Museum of Art, and the Library of Congress. She traveled widely with her husband exhibiting together throughout Europe, the United States and Canada. Their works are in many significant public collections including the Metropolitan Museum of Art, the National Gallery of Ottawa, and the Bibliotheque Nationale in Paris. Armington died on October 25, 1939, in New York. 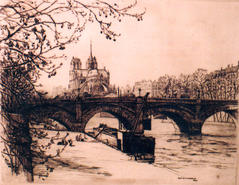