One of the more famous Spanish painters associated with influencing French Romantic painters, Francisco Goya was born in Fuendetodos, and took his earliest art lessons from his father, who was a master gilder. He also studied etching with monks in Saragossa, and then in 1776, when he was age 30, went to Madrid, where he was influenced by Giovanni Tiepolo, who did lighthearted historical genre scenes in rich coloration. In 1786, Goya became a court painter and did numerous royal portraits that had a light palette and "sparkling manner". By 1792, he was suffering ill health and had lost his hearing. During his recovery period, he did the work for which he is most known---"humanistic-biting satire on social mores with more than a hint of double meaning." And historical events turned him increasingly from more light hearted subjects. Napoleon invaded Spain in 1808, and Goya's themes reflected the cruelty and wanton killing that he observed. The Spanish monarchy was restored in 1814, and Goya who was a Republican, retired to a country home, where he, with much dampened spirit, painted with dark, sombre tones. He did "Black" frescoes in his home, "pessimistic yet imaginative images of degraded and bestial humanity. . .terrible but fascinatin-hallucinatory nightmares that foretell of death and destruction. He died in Bordeaux in 1828, having gone into voluntary exile in France in 1824. 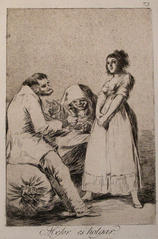