Clayton Pond was born in Bayside, New York, on June 10, 1941. He studied at Hiram College from 1959-1961 but earned his BFA degree from the Carnegie Institute of Technology in 1964. He enrolled at the Pratt Institute from 1964-66, earning his MFA degree from that institution. He taught in Palm Beach, Florida, in 1964 and C.W. Post College from 1966-1968. He then taught at the School of Visual Arts in New York City from 1968-70 and at the University of Wisconsin in 1972. Pond has a long list of over 70 one-man exhibitions in galleries, libraries, colleges and universities. His art works are in corporate, college, university, and private collections. His paintings and prints are marked by their vivid colors and themes of “obscure” objects such as sails, radiators, bathtubs and toilet paper. He “achieved notoriety by expanding the silk screen medium through the use of a high gloss varnish, … printing in thick layers of bright, contrasting colors.” Pond works in a studio outside of Atlanta. The silkscreen print by Pond in the Fine Arts Collection, “Pipes and Plugs,” was donated to the College by Forest Hinkhouse in 2002. 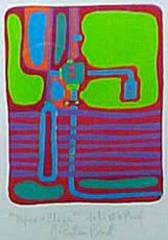