Catherine Redmond was born in Jamestown, New York, June 3, 1943. She studied at Cornell University from 1961-62, and Harpur College, SUNY Binghamton, receiving her BA degree in 1965. She also studied at the Art Students League of New York from 1969-74. Redmond was an assistant professor of painting at the Cleveland Institute of art, 1985-1990, and an instructor at the Art Students League, 1990-2000. She also taught as an adjunct associate professor at the School of Art and Design at the Pratt Institute from 2005-present. Redmond has participated in innumerable solo and group exhibitions which produced exhibit catalogs, some of which are listed in the references below. Solo exhibits include those at the Pratt Institute, David Findlay Jr. Fine Art in New York, MB Modern in New York and the Butler Institute of American Art in Youngstown, OH. Group exhibitions have been at Swarthmore College, David Findlay Jr., Elise Goodheart Fine Arts in Sag Harbor, New York, and other galleries and educational institutions. Her paintings are in numerous corporate collections including the Art Students League of New York, Butler Institute of American Art, Citibank of New York, The Dreyfus Corporation, Kaiser-Permanente, and the Kemper Group. Articles about Redmond have appeared in books, periodicals, and newspapers. She has been featured in publications such as American Artist, The Cleveland Plain Dealer, and The New York Times. Her website contains biographical information as well as photos of her art works, information about her writing, and a blog. The encaustic painting on rag-board by Redmond in the Fine Arts Collection was donated to Luther College by Joel Slutzky in 2002. 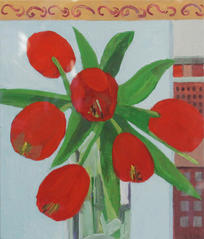