Willem Van Den Berg was born in the Hague, Holland, on February 16, 1886. His father was a renowned painter who encouraged his son’s artistic development. Van Den Berg studied at the Royal Academy of Arts under Willem van Konijnenburg and M.C. de Wild. In 1906, he was given a royal subsidy to continue his studies. By 1907 he had his first one-man show of drawings and etchings. A large exhibition in Rotterdam, NY in 1918 included Van Den Berg and his father. This was followed by one-man shows that same year in the Hague and in the Municipal Museum of Amsterdam. In 1938, Van Den Berg was appointed director of the Royal Academy. He retired from that position in 1953. He was also acknowledged as a court painter. In 1955, he was commissioned by the Royal Family to create a portrait of Queen Juliana which hangs in the Queen’s palace. Ultimately he was knighted for his contributions to Dutch art. Van Den Berg was awarded the Grandprix, Montevideo and the Bronze Medal, Barcelona. Van Den Berg died in Amsterdam in 1970. Van Den Berg’s works are represented in several significant museums in Holland including The Royal Palace, the National Museum, Boymans Museum in Rotterdam, and the Museum of Amsterdam. His works are also in the Museum of Trieste, Italy, and in numerous private collections in the United States. A retrospective of Van Den Berg’s art was held at the Guildhall Galleries in Chicago in 1980. Van Den Berg’s art is characterized by strong colors in closed spaces. He was especially known for painting farmers and fishermen along with other aspects of daily life. The painting by Van Den Berg in the Fine Arts Collection, “Volendammer,” was donated to the College by William Heintz in 1997 and is part of the William Heintz Collection. It is constructed of oil on board. 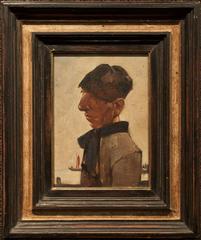