George Roland received his B.F.A. in painting and printmaking at Virginia Commonwealth University in 1969, graduating with honors. After doing some graduate work at Virginia Commonwealth, he earned his M.F.A. in painting and printmaking at the University of Wisconsin, Madison, in 1972. Roland has been a professor of art at Allegheny College, Meadville, PA, since 1979. There he teaches drawing, figure drawing, introduction to studio art, painting, computer art and liberal studies. Roland has made presentations to numerous art museums, colleges and universities throughout his career. He has received prestigious fellowships such as being named a Research Fellow at Carnegie-Mellon University in 1994, and received several grants for teaching as well. His work has been exhibited in juried shows throughout Pennsylvania and surrounding states. His art works have been selected to be in the collections of numerous institutions including the Library of Congress. The serigraph by Roland in the Fine Arts Collection was donated to the College by William Heintz and is part of the William Heintz Collection. This serigraph is included featured in the 22nd biennial “Catalog of the National Exhibition of Prints” published by the Prints and Photographs Division.

Catalog of the National Exhibition of Prints. Washington, D.C.: Library of Congress, 1975; webpub.allegheny.edu 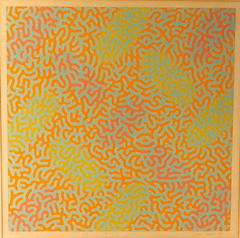