Doel Reed was born May 21, 1894, in Fulton County, IN, but grew up in Indianapolis. As a child, he attended children’s Saturday art classes at the John Herron Museum in Indianapolis where he first learned to appreciate art. After graduating from high school in 1912, he worked as an apprentice to an architect for four years. In 1916, he began his studies at the Art Academy of Cincinnati. After serving in the army during World War I with the 47th Infantry in reconnaissance and map making, Reed was left with permanent lung damage. The lung damage eventually prompted him to move to a drier climate, after he finished the final two years of his education at the Academy in 1920. Reed accepted a teaching position at Oklahoma A & M College in Stillwater (now Oklahoma State University) in 1924. He was the first artist to serve on the faculty. During his years at Oklahoma, Reed built the art department and served as its chairman. He took several sabbaticals, including two visits to Paris, in 1926 and 1930-31, respectively. He also spent summers in Nova Scotia as well as in Mexico. During World War II, he began to visit Taos, New Mexico, and by 1951 had become an established summer visitor to that community. Between 1942 and 1949, Reed presented a series of lectures and demonstrations about aquatints for the Association of American Colleges and Universities. These were presented to over fifty colleges and universities around the US. Retiring as a professor emeritus in 1959 from Oklahoma State, he relocated to Talpa, south of Taos. In an interview in the Albuquerque Journal in 1971, Reed noted, “I learned more teaching than I ever learned in art school. If one of your students has a problem, you can’t just throw it away, you have to help him solve it.” Both his home and his studio are located in adobe buildings on his property. Reed continued creating art until his death on September 30, 1985. Reed’s specialty was in print-making, a medium in which he was essentially self-taught, although he also created oil and casein paintings. He preferred to use a zinc alloy plate “because it etches quickly and has a lively quality.” Typically Reed created his prints in editions of 50, but throughout his career he also printed in editions of 25 and 30. Landscapes of New Mexico provided material for his aquatints (etchings) as well as his paintings. He explored widely in New Mexico, searching for subject matter. On location, he drew in crayon and ink, later using a different medium for the final product. Reed was an exceptionally active artist, exhibiting in over 350 juried shows. He won more than one hundred national and international awards and prizes, mostly for his aquatints. He was given full membership in the National Academy of American Design in 1952. He exhibited in the National Academy’s annual shows throughout his lifetime. His art works are represented in over forty museum collections including the Metropolitan Museum of Art, the Library of Congress, the Bibliotheque Nationale in Paris and the Victoria and Albert in London. The aquatint by Doel Reed in the Fine Arts Collection is part of the William A. Heintz Collection donated to the College in 1997. Entitled Adobe and Wild Plum, It is a black and white aquatint of the Taos mountains with adobe buildings and plum trees in the foreground and mountains in the background. It is number 14 in an edition of 25. 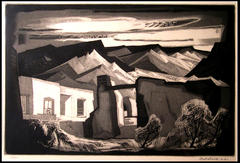