Born and raised in the south end of Boston, Jack Levine created social satirical pieces exposing the foibles and venals sins of mobsters and politicians, underworld characters whose actions are obviously insincere. He also satirized the middle class and created paintings of Biblical subjects. He enrolled in art classes at the Museum Fine Arts School of Boston and came under the influence of Dr. Denman Ross of Harvard University who, recognizing talent, gave him free art lessons. Levine was especially interested in the Old Masters at the Fogg Museum at Harvard. In 1935, he became a W.P.A. artist, using his experience growing up in a lower class neighborhood in his subject matter. He developed a modern Social Realism while borrowing from the techniques of Rembrandt and El Greco, something he calls "Old Master Pudding." He also learned methods from satirists Honore Daumier, Francisco Goya, and George Grosz. Levine's technique was to apply slashing strokes of color in thin layers of oil and then glaze, making his surfaces sparkle. His lampoons of rich people were especially suited to this method because their skin glitters and seems to corrode with light. Memberships include the National Institute of Arts and Letters and the American Academy of Arts and Letters. 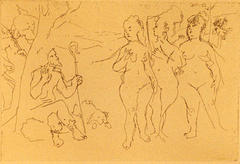