Thomas Lasansky was born August 31, 1957. After earning his BFA degree from the University of Iowa in 1979, he earned his MA and MFA degrees in 1983 and 1984 from the same institution. Born into a family of artists, Lasansky was influenced from a young age to create art. In interviews, he noted that he worked with his father, Mauricio Lasansky, for several years creating prints. He has since become “ambivalent” about printmaking, saying in one interview that the traditional printing method, resulting in a series of identical pieces, is “too reminiscent of an assembly line.” Lasansky more recently has created a series of American Indian portraits. He enjoys painting as well as printmaking. One commentator noted that he “fills every inch of his canvases with mesmerizing portrait studies in brilliant color. He is a dynamic storyteller who captures the character of his Native American subjects with every stroke of his brush.” Although Lasansky’s studio is located in Iowa City, he travels to various locales for inspiration for his art works. The list of Selected Solo and Group Exhibitions with which Lasansky has been involved is lengthy numbering more than 100. After beginning to exhibit in 1983, he has kept a busy schedule throughout Iowa, expanding to galleries in the southwest United States. He has received numerous awards including various purchase and patrons awards. 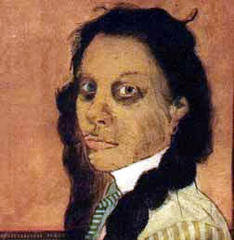