Edna Hibel was born in Brookline, MA, on January 13, 1917. She was educated in the Boston area, graduating from Brookline High School in 1934. At that time she entered the Boston Museum of Fine Arts School where she studied with Alexander Jacovleff until 1937. She began exhibiting her paintings during this time period, having several one-person shows in the Boston area. In 1972, Hibel moved to Singer Island, FL. Hibel established the Edna Hibel Gallery in Rockport, MA, in 1960, later also founding the Edna Hibel Gallery in Boston. Eventually in 1977 the gallery was relocated to Palm Beach, FL, and renamed the Hibel Museum of Art. In 1966, Hibel produced her first lithograph, a medium which she says, “opened up fresh and provocative aesthetic adventures.” She added lithography to her repertoire of art media, also enjoying working with oils and drawing. Hibel had her art works exhibited in numerous group and solo exhibitions, on the east coast, Florida, and in Europe. She has exhibited at the national museums of Brazil, China, Costa Rica, and Russia. Her works are included in many private and corporate collections including Harvard University, Boston University, the Detroit Art Institute, and the Milwaukee Museum of Art. Several books have been written documenting Hibel’s career, a selection of which are listed in the references below. She has been honored for her art with six honorary degrees from colleges and universities such as Eureka College and Simmons College in 2005. Her humanitarian efforts have also been recognized, especially her work raising money for children’s and medical charities. In 2001, Hibel received a Lifetime Achievement Award from “Women in the Visual Arts,” an organization in the South Florida area. She was honored in 2007 by the League of American Pen Women in Washington, D.C. In 2008, she was a National Women’s History Month honoree. The lithograph by Hibel in the Fine Arts Collection was donated to Luther College by William Heintz in 1997 and is part of the Heintz Collection. Entitled Three Graces, it was produced in red ochre ink in an edition of 40. 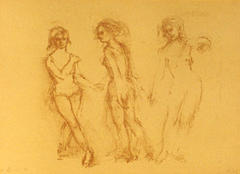