Born to a wealthy family in a small village, Maisons-Lafitte, near Paris, France, Jean Cocteau had a multi-faceted career as a stage designer, graphic artist, ceramist, sculptor, poet and film maker. His father, a lawyer and amateur painter, committed suicide when Jean was ten years old. The young man entered a private school for four years but was expelled in 1904. He ran away to Marseilles and, using a false name, lived among prostitutes until the police found him and returned him to his family. Cocteau had numerous love affairs throughout his lifetime with both males and females, yet was open about his homosexuality and did much writing to counter homophobia. His writing and art expression was surreal, and he became an ongoing influential exponent of this style. However, he was proudest of his poetry and insisted that he was primarily a poet. In 1908, he wrote poetry for a Paris stage production by Edouard de Max, prominent tragedy writer, and the next year, he began a libretto-writing association with Sergey Daighilev, Director of the Ballet Russes. His first published poetry was Aladdin's Lamp, which he completed at age 19. During World War I, Cocteau drove an ambulance, but was arrested and his war service was terminated. He became associated with artists and writers well known to the Parisian scene including Marcel Proust, André Gide and Pablo Picasso whom he met in 1917. The two of them joined Diaghilev in Rome where Picasso did the set designs and Cocteau writing for the ballet, Parade. Cocteau also founded a publishing company, which published his writings as well as musical scores of Stravinsky. Much of the writing for which Cocteau is admired was written during a recover period from an opium addiction that included Orphee, a stage play, and a novel, Les Enfants Terribles. Several years later, his first film, Blood of a Poet, was released, and he finished a play, La Machine Infernal, which some regard as his greatest play. A period of about 15 years followed when his opium addiction interfered with his productivity, but a triumphant 'return' for him was his film adaptation of Beauty and the Beast titled La Belle et la Bete. He also adapted several plays to films. In 1954, Jean Cocteau was elected to the Royal Academy of Belgium and the next year to the Académie Français. Other recognition included memberships in the German Academy of Berlin, the American Academy, Mark Twain Academy, and Honorary Chairmanship of the Cannes Film Festival. In 1959, he directed his last film, The Testament of Orpheus. Cocteau died in 1963 of a heart attack at his home, a chateau at Milly-la-Foret, France. 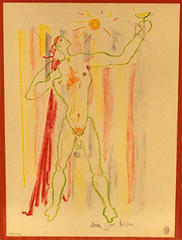