Popovi Da (Red Fox), San Ildefonso (1923-1971) is the son of famous San Ildefonso potter Maria Martinez and her artist husband Julian Martinez. He was born on April 10, 1923 at San Ildefonso Pueblo and died on October 17, 1971 in Santa Fe, NM. He legally changed his name from Tony Martinez to his Pueblo name, Popovi Da. He was educated at the Santa Fe Indian School, where he graduated in 1939. Popovi Da was a veteran of the U.S. Army and served in World War II. He lived most of his life in San Ildefonso Pueblo. Popovi Da listed his varied occupations as arts and crafts shop owner, Governor of San Ildefonso Pueblo, ceramics painter and designer, silversmith and painter. He was elected Governor of San Ildefonso Pueblo in 1952, and was Chairman of the All-Indian Pueblo Council. Like his father who painted the designs on Maria's pots, Popovi Da did his best work with symbolic designs and geometric figures. After his father's death in 1943, he did little painting. Instead, he assisted his mother with the decoration of her clay forms and developed a two-color firing process that produced the unique black-on-black pottery for which Maria is famous. A mural by Popovi Da can be seen at Maisel's Indian Trading Post, in Albuquerque, New Mexico. Popovi Da's artworks are in the permanent collections of many public institutions across the United States: Eiteljorg Museum, Indianapolis, Indiana; Thomas Gilcrease Institute of American Institute and Art, Tulsa, Oklahoma; Indian Arts and Crafts Board, Denman Collection, United States Department of the Interior, Washington, D.C.; National Museum of the American Indian, Smithsonian Institution, Washington, D.C.; Museum of Northern Arizona, Flagstaff, Arizona; Museum of the Rockies, Browning, Montana; and Millicent Rogers Museum, Taos, New Mexico. 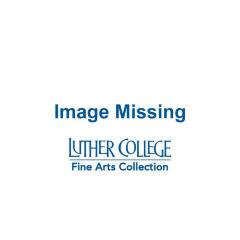