Margaret Tafoya (1904-2001) was the last of the matriarchs of the early 20th century pueblo potters. Born in 1904 at Santa Clara Pueblo, Margaret learned her skills from her parents, Sara Fina and Geronimo Tafoya, who were expert potters. some of her pieces are inspired by tales she heard from her parents and grandparents. Margaret and her mother were known for their ability to make unusually large storage jars and water jars. Tafoya's trademark is polished blackware. Her work is often decorated with bearpaw designs, which she considered good luck. Tafoya is considered a master of the art. She made deeply carved blackware and redware vessels, which are highly valued by collectors. She believed the secret to her technique were her polishing stones, which have been passed down through the generations. Tafoya taught her children, Virginia Ebelacker, Mela Youngblood, Toni Roller, and Esther Archuleta, her pottery-making skills. A National Heritage Fellow, Margaret TAfoya was part of the National Endowment for the Arts Folk Arts Program in 1984. In 1985, Margaret Tafoya was one of three New Mexicans selected to receive the Governors Award, New Mexico's highest artistic honor, awarded for a major contribution to the arts of New Mexico. Margaret Tafoya passed away during the night on February 25, 2001. 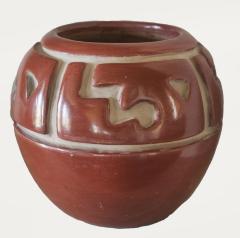