Leon Lundmark was born in Mörlund, Kalmar County, Sweden May 28, 1875. Trained as both a house painter and a decorative painter, he studied at a technical school and at the Stockholm Fine Art Academy with Zillen, Swenson and Baugh. After leaving Sweden in 1906, Lundmark settled in Pullman and then Kenwood, IL where he worked in the Pullman shops. He also lived in Chicago, IL and Altadena, CA, where he died on May 2, 1942. He exhibited his works at the National Academy of Design and the Art Institute of Chicago from 1921-1924. He took part in the Swedish-American exhibition of 1923 in Gothenberg, Sweden. He also exhibited at the Swedish Art Exhibition in Chicago in 1923 where he earned a prize and was a prize-winner at an exhibition in Philadelphia in 1925. He was the Director of the Scandinavian American Art Association in Chicago. After moving to California, he exhibited at the California Art Club in 1937 and 1938. Works by Lundmark were also exhibited at the University of Minnesota exhibit, "The Divided Heart: Scandinavian Immigrant Artists, 1850-1950" in 1982. Lundmark was especially known for his many marine paintings. The work by Lundmark in the Fine Arts Collection, a seascape, was donated by Arthur Andersen to the College in the late 1930’s. The work has been added to the Inventory of American Paintings Executed Before 1914 maintained by the National Museum of American Art at the Smithsonian Institution. 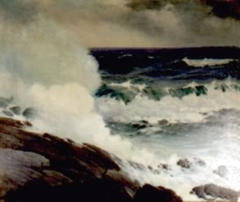