Peter Markham Scott was born in London on September 14, 1909, as the only child of Kathleen (Bruce) and Robert Falcon Scott. His father was the ill-fated Antarctic explorer who perished on an expedition to reach the South Pole in 1911. Scott's mother was a professional sculptor who had studied under Rodin. Peter Scott was educated at West Down, an English public school near Winchester. He later attended Oundle, a school which emphasized science and technology located on the River Nene. There, the students frequently engaged in bird-watching, fished, and collected mammal skins, owls, bats and insects. In 1927, Scott enrolled at Trinity College at Cambridge University to study science. As his time at Cambridge progressed, he became especially interested in art and finally switched to a course on the history of art and architecture. After Cambridge, Scott went to Germany to study art at the State Academy School of Munich. After one year, he returned to England to study at the Royal Academy Schools in London. He studied there two years and began submitting his paintings for exhibition. These exhibitions were successful, leading him toward a career as a professional painter. His subjects were frequently geese and wildfowl, but he also painted war subjects and portraits of important figures, including members of the British royal family. He preferred to paint in oils. Scott was enthusiastic about wildfowl, focusing his interest on ducks and geese. He developed his interest and philosophy as a naturalist, joining expeditions to observe wildfowl in Europe, as well as the US and Canada. He also became interested in sailing and began to race, finally winning a bronze medal as a member of the Olympic team in 1936. During World War II, Scott served in the Royal Naval Volunteer Supplementary Reserve in the seas around Great Britain. He helped plan D-Day and created a night camouflage scheme that was adopted by most of the forces serving in the Atlantic. After the war, Scott focused his interests on conservation, establishing what eventually became the Wildfowl Trust in Great Britain. He became chair of the World Wildlife Fund. He designed its panda logo and invented the red data books listing endangered species. He began to explore the Canadian Arctic and led expeditions there as well as to Iceland, Australia, New Guinea, New Zealand, Fiji, Hawaii, the West Indies, Panama and Ecuador. In his later years, he became interested in gliding and won numerous medals and records in that sport. Scott was the author of 18 books on natural history. He also illustrated 20 books, most of them about wildfowl. His autobiography, The Eye of the Wind, was published in 1961. He was a long time member of many conservation groups and the recipient of many honors including receiving honorary degrees. He was appointed MBE in 1942, CBE in 1953, and knighted in 1973. Scott died on August 29, 1989, in Bristol, England. At the time of his death, he was married to Philippa Talbot-Ponsonby with whom he had two children. He also had another daughter from a previous marriage. 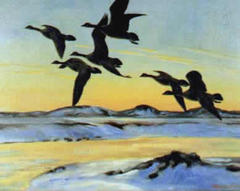