A painter whose reputation was made by the paintings he did of exotic lands, David Roberts was born and raised in Stockbridge, near Edinburgh, Scotland. His father, John Roberts, was an impoverished shoemaker, who, with his wife Christine, tried to support five children in a small house on Duncan's Land by the Water of Leith. The house remains standing in the 21st century. Only two of the children lived to maturity. Roberts' mother encouraged his obvious art talent, and allowed him to sketch in charcoal on the white washed walls of the house. At the age ot twelve, he apprenticed for a summer to Gavin Beugo, a decorator from Edinburgh, and this training, demanding fifteen hours a day, was very helpful to the future artist. From Beugo, he learned interior decorating techniques of marbling and graining wood, trompe l'oeil panneling, and techniques for painting large areas very quickly. At the end of the summer, Roberts was offered a job painting scenery for a circus, and accepting this offer set the course for the next part of his life. He spent 15 years doing theatre set designs throughout Great Britain, often working with Clarkson Stanfield. This collaboration was so successful that within a few years they were much sought after and could name their terms financially. However, much stress was associated with the work including the alcoholism of his wife who suffered from loneliness and had to be sent back to Scotland, and the destruction of some of his sets by a jealous competitor. By 1830, Roberts had abandoned the theatre and moved to London with a determination to become an easel painter. Much of the distinguished reputation he subsequently achieved was linked to the visual images he created from his extensive travels. In 1832, he traveled to Spain, Morocco, Tangiers and Tetuan in Africa, and the eager response to his paintings from those travels made it clear to him that the public wanted images of 'exotic' places. For the next five years, he read extensively to prepare for a much longer trip, this one to the Holy Land and Egypt, and he had enough sales from his oil and watercolor paintings and from book illustrations to depart in August 1838 when he was age 42. He traveled to Marseilles and then to Alexandria through Malta and Greece, arriving on September 24th. The British counsul facilitated his visit in Alexandria, and Roberts had access to a boat, a crew of eight men and a servant. He went to Cairo, saw the pyramids and the sphinx and then traveled the Nile River, doing much drawing and journal writing and also experiencing many adventures including raging illness, bandits, and much vermin. (His daughter, Christine, finding remnants of the journal, transcribed and published them many years later.) Returning to England, Roberts worked with lithographer Louis Haghe, and the result was a six-volume set with 248 hand colored lithographs. The publication was described as "the most ambitious work ever published in England with lithographed plates." (Petra) Egypt and Nubia were the subjects of the first three volumes, and the last three volumes were devoted to the Holy Land. Sold by subscription in monthly installments, the volumes brought him great professional distinction and were groundbreaking in that they showed living people in contemporary circumstances on 'ancient', revered soil. He had found much of the poverty shocking but was much inspired by their cultural heritage. Settling back into life in London in 1839, he was admitted to the Royal Academy and exhibited there for the next 30 years. He established a studio at 7 Fitzroy Street, and remained based there, while continuing to travel including many trips back to Scotland. In London, he was a popular figure with a very active social life. He saw much of his daughter, Christine, and her large family, was a member of the Garrick Club, and was close friends with prominent persons such as Dickens, Thackeray and Landseer. One of his painting projects towards the end of his life was a series of the Thames River. On November 25, 1864, while working one one of these paintings, St. Paul's from Ludgate Hill, he collapsed and died a few hours later that day. Museums with work by David Roberts include the Fine Arts Museums of San Francisco, National Galleries of Scotland, National Gallery of Canada, Denver Art Museum, Brooklyn Museum of Art and the Courtauld Institute of Art. 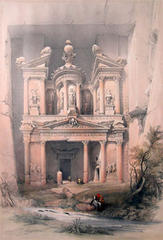