Belgian painter, sculptor, printmaker, photographer and designer Raoul Ubac was primarily active in France. Ubac was born Rudolph Ubach on August 31, 1910 in Malmedy a small Belgium town in the Ardenne where his father was Justice of the Peace and his mother’s family owned a tannery. From 1928 -1934 he traveled extensively in Europe and his artistic training was sporadic and varied. It was during a 1932 trip to the island of Hvar where Ubac encountered ‘found stone assemblages’ which he drew and photographed. From about 1934 to 1942 he concentrated on photography, joining the Surrealist group in Paris and contributed Surrealist photographs to the art journal Minotaure founded by Andre Breton. In 1934, under the pseudonym Raoul Michelet he published a collection of poems and photographs. In the Montparnasse print studio of Stanley Hayter Ubac is taught the traditional method of engraving in 1936 at a time when the medium was undergoing a revival. Ubac pioneered the experimental photography method of ‘heatage’ where the photographic plate was heated allowing the emulsion to melt and the image flow and worked with multiple photographic techniques. In 1945 after abandoning both photography and Surrealism, Ubac returned to painting, and in 1946, began to make double sided reliefs in slate. His early work had been abstract, but after WWII it became more figurative. Apart from paintings and sculpture, Ubac did a large amount of graphic works, including woodcuts, engravings and etchings. He also created designs for tapestry—notably a 1969 series for the Nouveau Palais de Justice in Lille, France. Ubac also collaborated with Cubism founder Georges Braque on 1961 stained glass for a church at Varengeville, France and created the mosaics and tapestries for the Maeght Foundation in Saint-Paul de Vence in 1967. In 1957 Ubac settled in L’Oise where he continued to experiment in painting with amalgamated resins. He died there on March 24, 1985. Select Museum Collections: San Francisco Fine Arts Museum, CA Art Institute of Chicago, IL Minneapolis Institute of Art, MN National Gallery of Art, Washington, DC 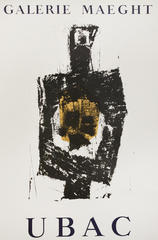