Born in Romania, Saul Steinberg lived most of his life in New York, becoming a well known 20th-century comic illustrator and philosopher, who used a variety of mediums including collage and mural painting. He is perhaps most famous for his poster of the New Yorker whose shortsighted view of the world causes the cityscape of Manhattan to be the landmark from which everything else recedes. He studied at the University of Bucharest and the Reggio Politecnico in Milan, earning a doctoral degree in architecture in 1940, but he never designed a single building. He had drawings featured regularly in Italian weeklies, and they like the ones he later did in the United States were popular for their doodling, rococo style and tongue in cheek commentary. In 1941, he fled fascist Italy for the United States but was sent to Santo Domingo because the quota for Rumanians was filled. From there he sent the New Yorker magazine editors cartoons, and they sponsored his move to New York in 1942. In 1943, he married the artist Hedda Sterne and also had his first one-man show, held at the Wakerfield Gallery in Manhattan. He was also drafted into the United States Navy during World War II, and the New Yorker editors published his visual accounts of the war from Italy and North Africa. He continued at the New Yorker as staff artist and also did murals for the American Express Line and the Terrace Hotel in Cincinnati. It was said that after the war, his style became more abstract, philosophical, and symbolic. In the 1950s, he devised a whole series of animals to symbolize members of society. A major post-war, one-man show was held in 1952 at the Sidney Janis Gallery. He died in Manhattan at the age of 84. 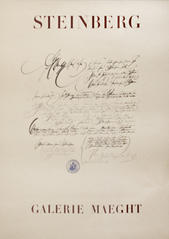