Alberto Giacometti (October 10, 1901-January 11, 1966) The son of Swiss impressionist painter Giovanni Giacometti, he was born in Stampa in the Bregaglia Valley. He displayed a talent for painting and sculpture at an early age and with his father's guidance he made his earliest drawings, paintings and sculpture using his family for models. By age ten he had progressed from a simple illustration of Snow White to a detailed copy of Rembrandt's Good Samaritan. His first bust, made when he was just thirteen, was of his younger brother, Diego, who would become his lifelong assistant. Alberto spent six months when he was eighteen as a student at the Ecole Des Arts et Metiers in Geneva. He visited Venice with his father where he first experienced paintings by Tintoretto. He stayed a short period in Italy, where he studied Byzantine Mosaics and Baroque architecture. On the way home they visited a church in Padua filled with frescoes by Giotto where he had his first experience with an almost hallucinatory vision giving him a challenge to portray the world according to his own desires rather than the conventional ones. He went to Paris in 1922 to study with Rodin's pupil Bourdelle and settled in the tiny Montparnasse studio where he worked the rest of his life. He allied with the surrealists, until he wearied of creating what he called "these mental reconstructions." He sought, through his sculpture, to probe for the essence of life, but was never satisfied with the search. During this period he started the usual figures and busts at typical sizes and after several months of work the figures had shrunk to the size of a pin. One of the great bohemians, Giacometti loved to haunt cafes until late at night. His dingy studio, lit by a dusty studio window and bare light bulbs, heated by a potbellied stove, was strewn with cigarette butts. He traveled little, except to Switzerland at Christmas and New Years. He left Paris in December 1941 for Switzerland, but Diego stayed behind in Paris to take care of the studio. Giacometti's extremely personal conception of space and figuration matured after the Second World War and he developed still further his elongated and isolated figures with a suggestion of existentialist tragedy, skeletal and emaciated groups which created their own spatial environment in a unique way. Between 1940 and 1945 he produced works on a miniature scale which nevertheless created a symbolic impression of magnitude. It was during the years in Geneva that he met Annette Arm. She moved in with him and abided by his request that she not change the way he lived. She became his model, his muse and after a few years, his wife. He continued to make nocturnal visits to cafes and to use prostitutes for his models. His personal life has been described (perhaps wrongly) as dealing with impotence, a foot fetish, and his being sexually comfortable only with prostitutes. He went through a series of inconclusive romances to his ultimately hellish marriage in mid-life while carrying on an affair with Caroline who was a prostitute, extortionist and thief. In December 1965 he departed for a hospital in Switzerland complaining of exhaustion. A month later, in January 1966, he died of complications from heart disease. He was sixty-four years old. Compiled and submitted August 2004 by Jean Ershler Schatz, artist and researcher from Laguna Woods, California 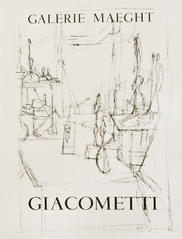