George Ames Aldrich was born in Worcester, MA on June 3, 1872. He began his art experience in Europe, working as an illustrator for Punch magazine and The London Times in the 1890’s. On his return to the United States, Aldrich studied art in the Midwest and the East Coast. He was a member of the Art Students’ League in New York City and perhaps studied at M.I.T., as evident by the buildings he incorporated into his landscape paintings. Aldrich returned to Europe, studying in Paris at Academies Julian and Colarossi. He later joined the Societe des Artistes Francais. Aldrich spent years traveling Europe, developing the impressionist landscapes he is well-known for. His stint in Europe included a year living with the artist/instructor Dieppe. On his return to the United States in 1918, Aldrich began painting scenes of Chicago, IL and South Bend, IN. His works were exhibited in many venues including the following: the Art Institute of Chicago, the Hoosier Salon, and the Chicago Society of Painters and Sculptors. Aldrich had the opportunity to travel Europe again after winning an architectural club traveling scholarship in 1924. He spent six months at the American Academy in Rome, three months at the Fontainebleau School of Fine Arts in France, and spent the rest of the time traveling throughout Europe while painting and sketching. Aldrich died in Chicago in 1941. Aldrich’s works remain part of several collections including the Art Institute of Chicago (IL), the Museum of Fine Arts, Houston (TX), and the Sioux City Art Center (IA), to name a few. 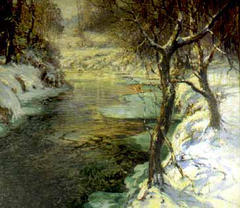