German sculptor Ernst Friedrich August Rietschel was born at Pulsnitz in Saxony December 15, 1804. At the age of 16 he began to study at the Dresden Kunstakademie and in 1826 moved to Berlin to study with Christian Daniel Rauch. Two years later he earned a scholarship to study in Rome, but delayed his journey until 1830 so he could help Rauch complete the monument to Maximilian I Joseph in Munich. After returning from Italy, he worked two years more with Rauch, then took an appointment as professor of sculpture at the Dresden Kunstakademie. Rietschel completed numerous works during his life, including the monument to Frederick Augustus I in Dresden (1831-43) and several pediment sculptures and reliefs for buildings at the University of Leipzig. His major portraits include Shiller and Goethe in Weimar, and Gluck and Mozart for the first Dresden Court Theatre (1838-41). The Berlin Opera is adorned with his pediment sculptures personifying Music, Dance and Dramatic Art (1844). In 1845 he produced a Pietá for the mausoleum of the Friedenskirche in Potsdam. Commissioned by Frederick William IV, the Pietá marks Rietschel’s earliest recognition of his work as equal to that of Rauch. Rietschel’s sculptures represent a transition in German sculpture from an earlier classical style toward a more objective realism. In many works he dispensed with traditional drapery in favor of depicting figures in contemporary clothing, an aesthetic decision that was legitimized when his proposal for Shiller and Goethe was favored by Ludwig I of Bavaria over Rauch’s more traditional concept. While working on the monument to Shiller and Goethe, he also produced numerous reliefs for the north side of Semper’s Dresden Museum, including statues of Pericles, Phidias, Hans Holbein the Younger, Dürer, Giotto and Goethe. 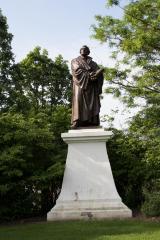